The Linaro Edge computing group, LEDGE, is working to make this world much more simpler by introducing standardization where it makes sense and allowing hardware innovation to be fully exposed. The presentation will discuss new design patterns that are becoming available for industrial products:

On the boot firmware side: securely booting a *single* Linux image on multiple platforms is becoming a reality. U-Boot and EDKII have been enhanced so that UEFI boot experience is the same for both environments. For the next cycle, we are tackling standard updates of firmware components with anti-brickable, anti-roll back protections.

On the OS side: delivering a common kernel with a common userland is possible. Google attempt to go a step further with Project Treble should be an inspiration for composing agile distributions.

On the applications side: in BKK19 LEDGE demonstrated the feasibility of hardware agnostic ultra-low latency Time Sensitive applications with Linux without RT patches. Now, new APIs such as MxAPIs are required for efficient architecture agnostic symmetric multicore programming with asymmetric capabilities (OpenAMP). Arm Revere is also paving the way to standardizing native access to devices from VMs or applications: how this could affect control loops?

François-Frédéric is an entrepreneur with 30 years of experience in technical, sales and marketing positions. Prior to joining Linaro, François-Frédéric was VP Business Development at 6WIND where he has been instrumental in creating success for SDN and NFV offerings.

Prior to that, he has been CTO and co-founder of Vedicis where he led architecture and development teams, and previously he held several technical and marketing functions at Olivetti, Unisys, Access360, Tempoline, Versada Networks, NetSecureOne and Radware.

François-Frédéric holds a degree in computing science from Université de Paris VII. He is the author of seven patents. 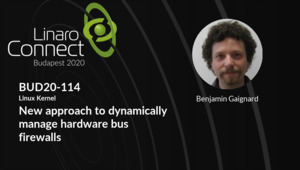